If you’re on Maui, locals know that nothing beats the cool treat called guri guri, especially on hot, sunny days. The name “guri guri” is really synonymous with Tasaka Guri Guri, which has been selling this ice cream-sherbert-ish sweet treat for more than 90 years. Its founder, Jokichi Tasaka shared the dessert with Japanese plantation workers in the early 1900’s. Story has it that he initially called it “goodie-goodie,” but because some could not pronounce it, the name eventually evolved into “guri guri.”

The business, which is still family owned and operated, has gone through many changes through the years. Besides the changes with its storefront, there was also a point in time when the guri guri was served with azuki beans. However, with the rising cost of maintaining and insuring of the steam boiler for the beans and with the eventual waning interest in adding it to the guri guri, it was discontinued. Nonetheless, this business just celebrated its 40th anniversary at its present location.

There are only 2 flavors to choose from, strawberry and pineapple. Strawberry is the more popular one, outselling the pineapple flavor 3-1.  The scoops of guri guri are sold in paper cups, served with a little wooden spoon.

This century old secret family recipe is heavily guarded, though many have tried to replicate it using lemon lime soda, condensed milk, and a variety of fruit juices. There are several recipes that you can find online, but none of them yield the exact product that can be found only at this little corner shop at Maui Mall in Kahului.

If you’re visiting Maui, make sure you to make a stop at this guri guri institution. And for neighbor island folks, remember to pick up a “cold pack” (2 quarts of frozen guri guri that will keep for up to 2-1/2 hours) to share with friends and family back home. 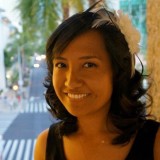 My loves: going on adventures with my husband and friends, traveling, eating, baking, exploring Hawaii.